This article is part of a series that provides guidance for planning configuration management for the IoT CE solution.

This article explores patterns of stream usage for situations where you work on multiple releases of a product concurrently. Many organizations find these patterns useful on their own. These patterns also form the basis of the more complex multistream variant patterns, as explained in the Multistream variant strategy article.

Many patterns are introduced in the companion Patterns for stream usage article. That article in turn points to the other stream details articles in this series. We suggest you read about the more basic patterns, such as the single stream strategy, before you read the current article.

The patterns we present here are relatively complex. If an opportunity to “go simpler” presents itself, even for a single component, we encourage you to do so. For example, if you can build and maintain a reusable component of regulatory requirements using a single-stream pattern, rather than one of the multistream patterns, by all means use the simpler pattern.

Simple patterns for sequential releases include:

Future articles in this series will discuss the multistream promotion and multistream maintenance patterns.

In this section, we address the patterns at the level of local (that is, single-tool) configurations. Later, we discuss maintaining global configurations that are based on these patterns.

Here is how you work with this pattern:

The following diagram shows how this pattern works:

This pattern has these benefits:

The simplicity of this pattern is appealing. It’s easy for teams to use successfully, particularly when you don’t anticipate the need to archive older streams. If you will be producing so many releases that you might want to archive your older streams, you should use the next pattern.

In this pattern, the main or trunk is the source of all the release branches. Here’s how you work with this pattern:

This diagram shows how this pattern works:

This pattern has these benefits:

However, this pattern has a more complex cross-stream delivery model than pattern 1, where you branch from the previous release.

The delivery model for this pattern might be confusing until team members get used to it. But the ability to archive completed streams can be very useful.

This is a straightforward global configuration (GC) evolution model. The following diagram illustrates the conceptual stream network for the local branching model and conceptual changes as the GC hierarchy evolves.

Keep in mind that the associated local configuration management pattern has an issue in that you can’t archive earlier streams until work on all later streams is completed.

In this diagram, the abbreviations stand for the application that contributes a stream or baseline: 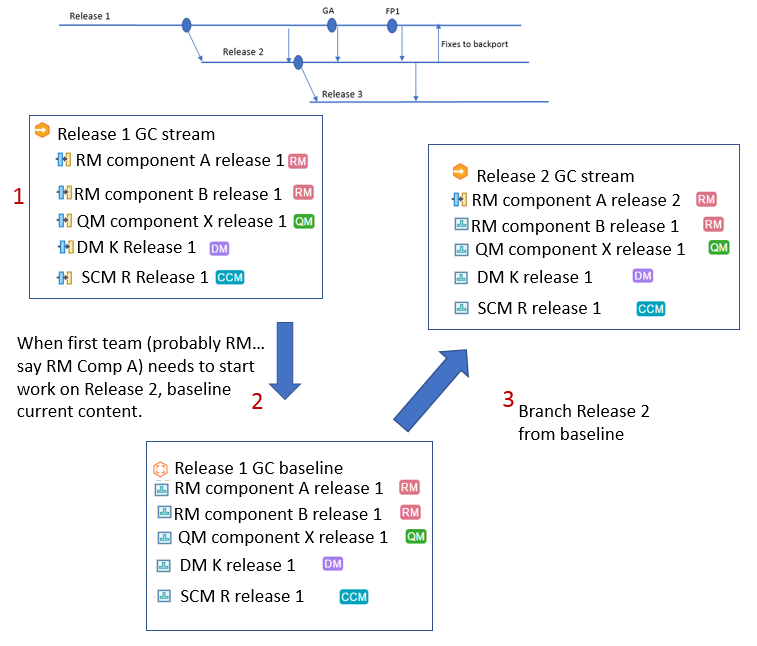 You might need to add or change those steps so that the workflow meets your needs. Here are some common variations:

The following diagram illustrates the conceptual stream network for the local branching model and conceptual changes as the GC hierarchy evolves. 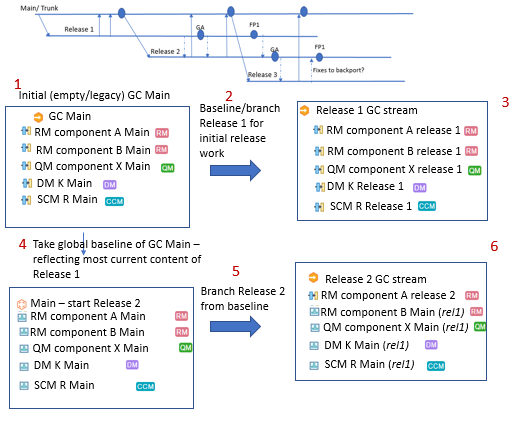 Overall, the GC workflow for this option is similar to the previous GC workflow, with the addition of the Main stream as the stream from which new Release branches are made. You can use the common variations of the previous workflow, as well. The main difference is that changes are delivered to the Main branch of each local configuration before branching a new release, rather than delivering all changes to the most current release stream before branching a new release.

An antipattern: Just-in-time branching from the main product branch

We have encountered a variation of pattern 2, “Branch from the main product branch”, which we consider to be an antipattern. Remember, in pattern 2, a new branch for Release N was created as soon as work began on it. This antipattern works a bit differently.

Just as with the previous Pattern 2, the antipattern enables archiving of completed streams, because the individual release streams don’t have their own branched streams.

The delivery model for this pattern actually is simpler than is the Pattern 2 model.  Here, all fixes from all release streams go back to the main stream and then are pulled down as needed. This is about as simple a delivery model as can be conceived!

So, why do we consider this to be an anti-pattern?

It’s because of the confusion and administrative overhead that can result from using this pattern.

Let’s say that I’m starting my project and I’m working on Release 1. The GC administrator created a global context for my team to work in, let’s call it Current Release (Main). Now, one of the teams we are collaborating with finishes their Release 1 work, causing a GC branch for all the rest of us. We need to switch from the Current Release (Main) GC to a new Release 1 GC, even though we haven’t started working on a new release! Not everyone will make the switch successfully, resulting in some content creation errors. Additional aspects of my team’s tools also need to be reconfigured in mid-release, such as (1) the Rational Team Concert mappings that are used to “glue together” our GC and our work items, (2) our dashboard widgets, and (3) our reports, because of the context switch that is caused by using this particular stream pattern.

You might choose to use this pattern, if you think that its simple delivery model is compelling. Just be aware that using it leads to a very clumsy context-switch in the middle of your project. This switch can result in staff losing track of which context they should be working in and administrators doing substantial reconfiguration of tools.

Large-scale software and product development commonly has teams working on many releases at the same time. To perform effectively under such circumstances, teams must be able to start each release with the proper artifact versions, evolve their release artifacts without pollution from extraneous changes, and share their changes with others when it is appropriate to do so. This is as true for lifecycle artifacts, such as requirements and test cases, as it is for source code.

Finally, we presented a multistream management antipattern.  At first glance, this antipattern appears to be similar to the preferred “branch from the main product branch” pattern.  However, our analysis of the antipattern shows how some seemingly minor differences in your branch management strategy could have a significant negative impact on team performance.

See the other articles in this series:

Contact Tim Feeney at tfeeney@us.ibm.com or Kathryn Fryer at fryerk@ca.ibm.com.

You can find details about these topics in IBM Knowledge Center:

Todd Dunnavant, Ph.D., P.E., is a Principal Solution Architect with IBM Watson IoT Services. He has 20 years experience in successfully transforming how software, systems, and product engineering teams work. For the past six years, Todd has focused on realizing these transformations using IBM’s Jazz-based products. More recently, Todd has helped multiple product-centric companies adopt the lifecycle configuration management capabilities of the IBM IoT CE tool suite. He can be contacted at twdunnav@us.ibm.com.

No 1 person rated this as helpful.