This article is part of a series that provides guidance for planning configuration management for the IoT CE solution.

This article discusses patterns of stream usage for situations where multiple variants of lifecycle artifacts need to be maintained in parallel for each of several releases. This is a common need of product-centric organizations.

These and other patterns – including several that these patterns build on – are introduced in the companion Patterns for stream usage article. Read about these base patterns before you read this article. You’ll also find links there to the other stream pattern articles in this series.

The patterns we present here are the most complex stream usage patterns. If an opportunity to “go simpler” presents itself, even for a single component, we encourage you to do so. For example, if you can build and maintain a reusable component of regulatory requirements using a single-stream pattern, rather than using one of the multistream patterns, by all means use the simpler pattern.

This article starts off with a simple example to help you understand what we mean by variants. It explains the structure and applicability of two stream patterns, with examples of local configurations:

In multivariant development, multiple product lines – or several variants of a single product line that are created from a common base – can have these characteristics:

Consider different instances of a fictional “Model Year 2030 Superbrand Cool Car” automobile, which could have three variants for options:

Most of the base lifecycle artifacts for any vehicle instance are shared among the three variants. However, the creation of each variant results in either (1) creating new, unique artifacts or (2) tailoring initially-common artifacts. The tailored artifacts no longer can be widely reused by other variants.

This pattern includes characteristics of both the single stream pattern and the multistream concurrent release development patterns.

The following diagram illustrates the characteristics of a representative configuration tree for this pattern, based on the Model 2030 Superbrand Cool Car.

Notice these elements in the diagram:

Because there is no set pattern of deliveries between streams, it is very important that you plan inter-stream deliveries carefully and use a governed process.

As time goes on, the configuration tree (the network of streams and baselines) for local components will become more and more complex. We strongly recommend that, as part of your governed configuration management process, you define and follow a naming convention so your team members quickly and consistently understand the key characteristics of a given configuration.

Ensure that baselines for each of the variants conform to the guidance in the single stream strategy article. Further, we recommend that you take variant baselines before doing any cross-stream delivery to the variant stream.

This pattern combines the characteristics of the previous multivariant pattern and one or more of the multistream concurrent release development patterns. This pattern is commonly used for product-centric development when several teams are progressing different aspects of a variant at the same time. For example, a development team could use a “release” stream to develop their feature before delivering their work back to the main variant stream.

The next diagram shows some of the aspects of this pattern. Here, this diagram adds a tree of parallel release streams onto the Ejection Seat + VR System variant stream of the previous stream diagram. In this case, the parallel streams are created and managed using the “Branch from Product Main Branch” pattern for multistream concurrent release development. The “Branch from previous release” pattern also could have been used here.

To simplify the diagram, we’ve removed some of the icons that represent the baselines you should take of a target stream before each cross-stream delivery to it. Remember, you should still take these baselines.

You can see where the ES + VS variant team adopted the “Branch from Product Main branch” pattern for managing multiple release streams. This pattern has the following characteristics:

Just as in the sequential release with multiple variants per release pattern, changes that are created for any variant might be:

In any large development effort, a global configuration (GC) for a product variant is almost always a hierarchy of global configurations. This hierarchy might be constructed as a top-level GC to organize contributions from all solution component teams, plus a hierarchy of associated GCs, each of which exposes the lifecycle artifacts managed by the pertinent component team. The following diagram illustrates this concept, presenting a portion of the GC hierarchy for one variant of IBM’s Automated Meter Reader (AMR) sample artifact set. The abbreviations indicate where the local stream or baseline comes from:

Here, you can see that all the solution-level configurations are streams (work in progress), either global or local. The Meter Reader Component stream includes an MR Reqts stream, with a mix of local baselines and streams. Evidently, some teams have finished their work and baselined their contributions. The Meter Interface Component global configuration is a baseline, and contains only other baselines in its configuration hierarchy. 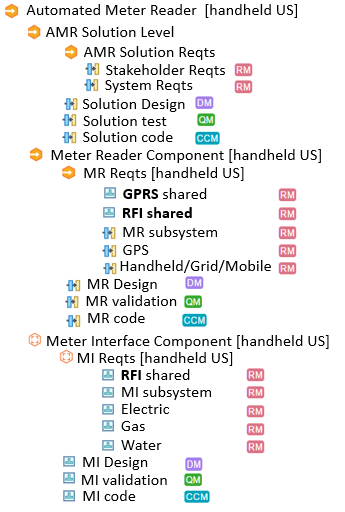 This GC hierarchy will change as the team creates variants:

To manage the complexity that can occur with a long-lived, multivariant product, we recommend that you use a two-fold approach: meaningful naming conventions for your GCs, and tags for your components and GCs. For example, you might use a special tag for each variant. See the component organization section of the Defining your component strategy article for guidance on using tags. This advice also applies to global streams and global baselines.

Variant teams will most likely prefer to not create an empty GC and then build out the total hierarchy manually. Doing so can entail substantial effort for a variant GC with tens to hundreds of contributing global configurations and even more contributing local configurations. We’ve seen clients use three main patterns. The first approach, fortuitous reuse, is most commonly used in organizations that don’t invest in intentional reuse. The other two are suitable for organizations that make concerted efforts to create and maintain reusable assets.

Use this approach if no product-line organization is responsible for maintaining standard lifecycle artifacts. You can also use it if the new variant differs relatively slightly from an existing variant. Here, the variant team does the following tasks:

At this point, the solution team has an initial GC tree. However, substantial work is needed to provide them with their “best” starting point. The team continues with the following tasks:

Many clients begin with the fortuitous reuse approach, because they don’t have standard lifecycle artifacts they can leverage to save time and improve quality. These clients face the following issues:

To understand this approach, consider that many software applications are created by starting with one or more standard software frameworks and then adding application-specific code. The Application Engineering pattern for jump-starting a variant GC philosophically is similar. To use this pattern, an organization intentionally creates, maintains, and reuses standard lifecycle assets. They use these assets to define, implement, verify, and validate large, reusable solution frameworks and discrete reusable solution components, depending on their situation.

Teams involved in the pattern include:

This approach is intended to provide reusable content as a “150% solution” for any variant. That is, the solution team begins with content that exceeds their needs, and through one approach or another, they filter the content down to just what they need.

Development of many product variants, starting from a common base of versionable lifecycle artifacts, is a fact of life for many product-centric organizations. Each variant spawns its own branch of parallel development. This is further complicated if the variants themselves are developed using a strategy of multiple parallel releases. In this case, each variant can have its own family of parallel release development branches.

This article describes two branch management patterns that you can use to help manage multistream variant development: (1) sequential releases with multiple variants per release and (2) multiple variants with parallel release streams per variant. Each pattern is based on foundational patterns that are described in other articles in this series. Each pattern can be implemented using the IBM CLM and CE solutions.

The IBM CLM and CE solutions provide the global configuration capability, which helps you manage the hierarchies of multi-domain lifecycle artifacts that describe and support the development of each variant. In this article you learned about three approaches for creating the configuration hierarchy for a new variant: (1) fortuitous reuse, (2) the application engineering pattern, and (3) the domain engineering pattern. Consider your organization’s philosophies about asset reuse and solution engineering while you decide which of these patterns might be best for you.

See the other articles in this series:

Contact Tim Feeney at tfeeney@us.ibm.com or Kathryn Fryer at fryerk@ca.ibm.com.

Todd Dunnavant, Ph.D., P.E., is a Principal Solution Architect with IBM Watson IoT Services. He has 20 years experience in successfully transforming how software, systems, and product engineering teams work. For the past 6 years, Todd has focused on realizing these transformations using IBM’s Jazz-based products. More recently, Todd has helped multiple product-centric companies adopt the lifecycle configuration management capabilities of the IBM IoT CE tool suite. He can be contacted at twdunnav@us.ibm.com.