Some of the features are highlighted here: 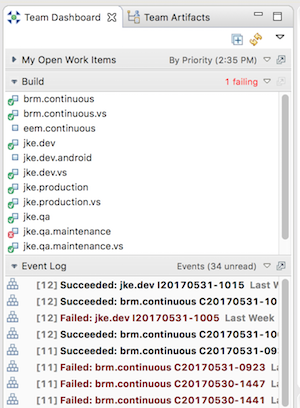 The build support is designed to accommodate your existing infrastructure, not force you to rewrite it. Out-of-the box, it supports Ant, Maven, and any build command-line that you want to invoke. There is also support for building Visual Studio Solutions and integrations with Rational Build Forge and the Jenkins CI. 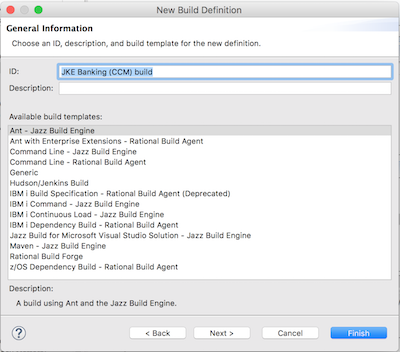 Traceability with other artifacts

Builds are automatically linked with change sets that are included in the build, and the work items fixed in the build. These rich links are displayed in the build result editor. To learn more about traceability in builds, see Builds and Rational Team Concert source control. 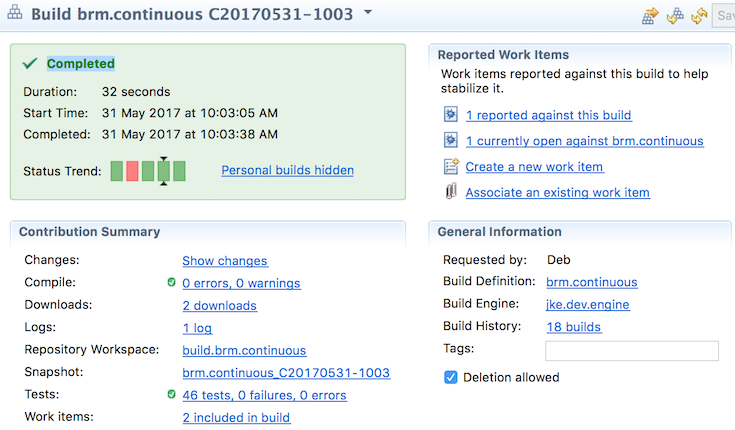 You can configure builds to run on specific days and times, or at a continuous interval. Builds can be set to run only if there are new changes to builds. 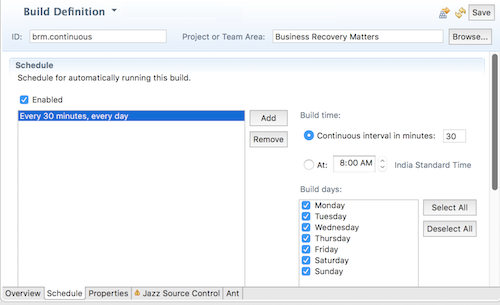 You can run the team’s real build against code that you have not yet shared with the team. Simply specify your own repository workspace instead of the team’s build workspace. This is useful for checking how your code integrates and builds with the rest of the team’s changes, without potentially breaking a team’s build. It’s good practice to always run a personal build before delivering your changes to your team’s stream. 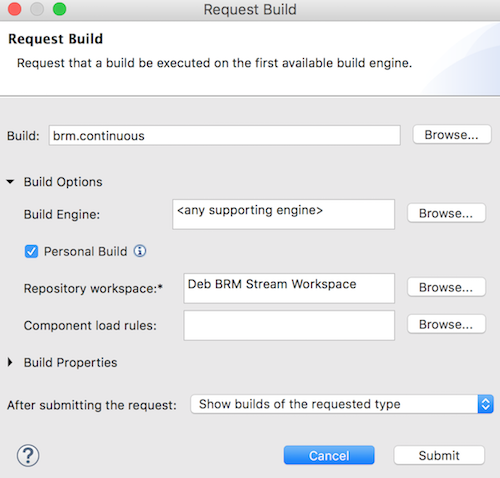 Fine-grained compilation and test results can be published to the build and viewed in any UI. This is especially useful in the Eclipse and Visual Studio clients, where you can quickly navigate to and fix the broken tests or the code, and re-run the build. 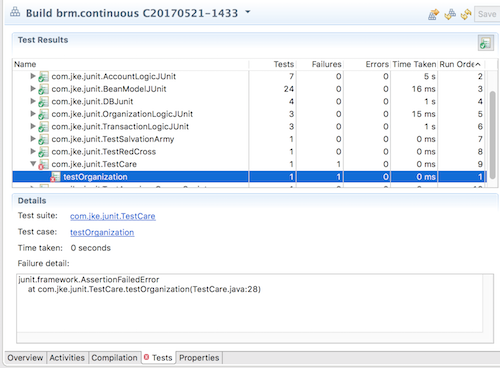 When you encounter a build problem, you can report a work item directly from the build result in the Eclipse and Visual Studio clients. The work item and build result are richly linked in the UI. You can also associate a work item with a build result through the web client. 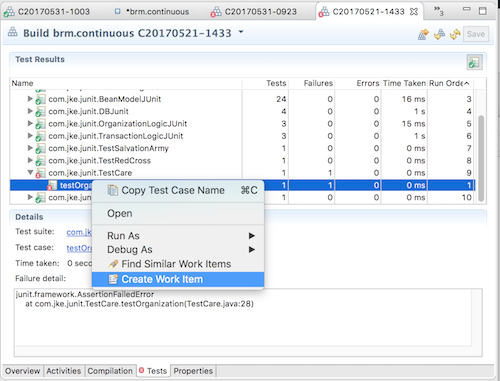 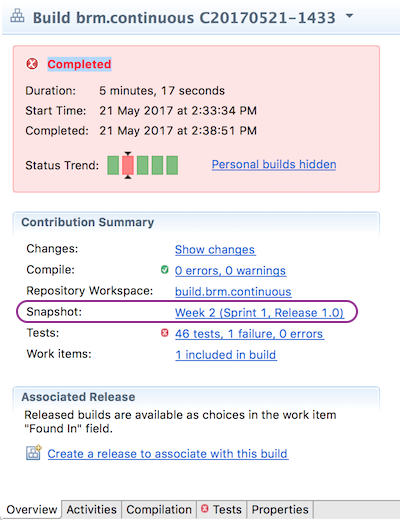 Any two builds can be compared and the changes and work items between them inspected. This is useful to see what changes went into a build or even what could have potentially broken a build. You can compare builds either in the Eclipse or the Visual Studio client. 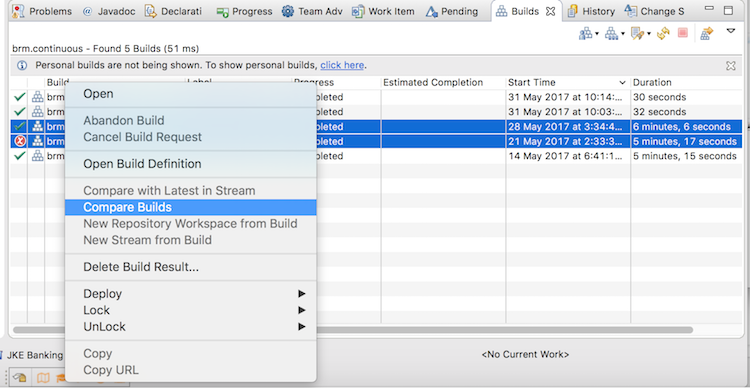 Several build-related reports are available out-of-the-box to help you keep an eye on build failure rate, duration, and problematic tests. You can add these reports to your project or team dashboard. 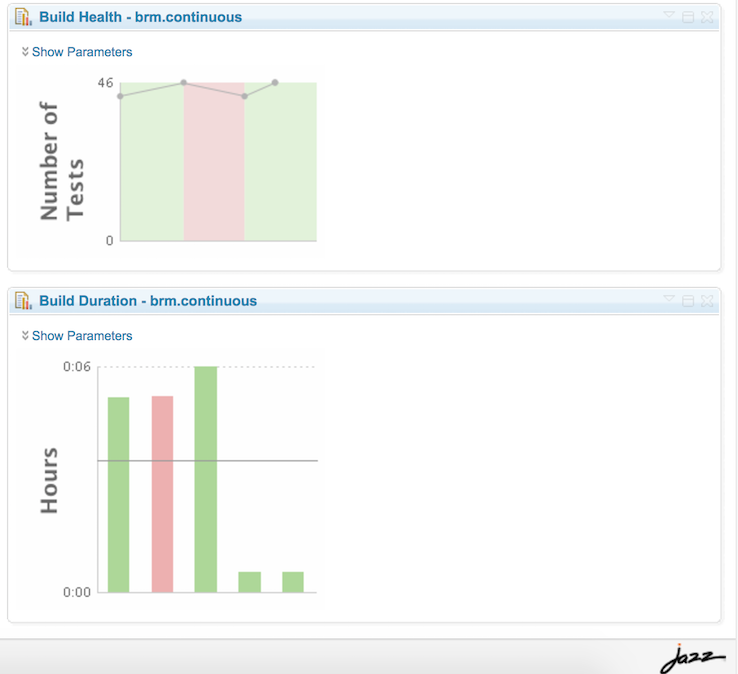 Through the project area editor in the Eclipse client, you can configure email notifications to be sent out when a build fails, with customizable criteria for each build definition. 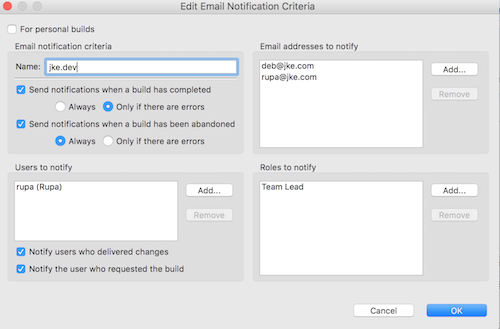 The Visual Studio client lets you request builds, view build results, navigate to linked artifacts, compare builds and so on – all of the build activities that a .NET developer needs to perform for continuous integration and testing. For details on what you can do with builds in this client, see Performing build tasks in the client for Microsoft Visual Studio IDE. 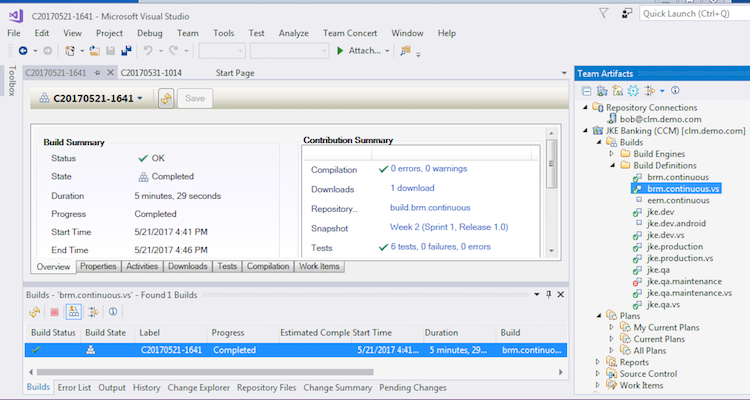 Through a web client, you can view build results, such as execution summaries, downloads, and logs. You can also request builds and report work items against a build. 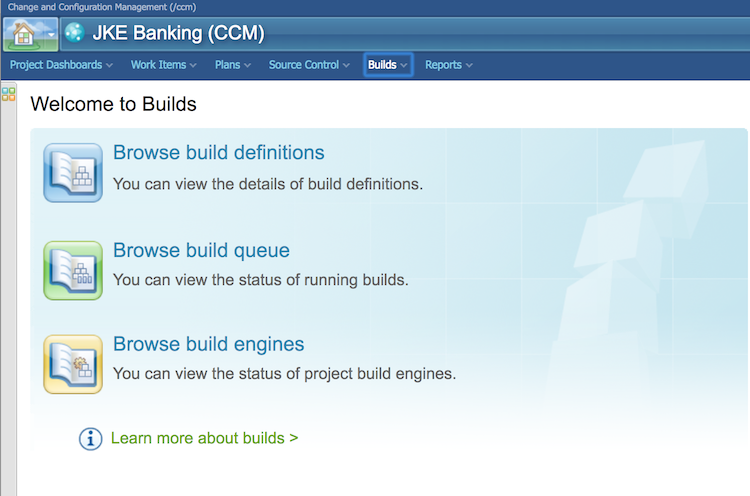 Team Build includes the Build toolkit, a library of Ant tasks that allow your build scripts to report activities, publish downloads, logs, and compilation and test results. For advanced scenarios, such as integration with external scheduling and build systems, other tasks can request builds and control their lifecycle. Installing the Build System Toolkit has instructions on how to install the toolkit.