This note explains the authentication mechanisms used by Jazz applications, and reasons for choosing one over the other. It also describes how to change the configuration to use alternate authentication methods and how to unsecure feed URLs for a custom deployment, along with the tradeoffs associated with each configuration.

There are three options available for configuring user authentication in Jazz products.

The “web container”, or application server (WebSphere or Tomcat), handles authentication for the Jazz Team Server, Rational Team Concert, and Rational Quality Manager servers. All other applications delegate authentication to the Jazz Team Server (by redirecting clients to the Jazz Team Server to authenticate with it). This is the default configuration, and is the only configuration supported in releases prior to 6.0. Of the four types of login allowed by the Java EE servlet specification, Jazz supports three of them: form (the default), Basic, and client certificates. When applications are deployed in separate application servers, by default users must login to each of them, though WebSphere servers can be configured to implement single sign-on across a collection of servers.

The OpenID Connect (OIDC) authentication protocol was established in early 2015 as an extension of the OAuth 2.0 protocol, designed to be easier to adopt across a wide range of clients (native applications, browsers, browser-based applications, and mobile devices). It is extensible and configurable (with optional features). Jazz Security Architecture is a particular profile of OIDC, specifying which optional features are included, and a few extensions. Authentication is handled by a separate OpenID provider (OP, also known as an authorization server); Jazz applications delegate to that provider instead of relying on the application server to handle authentication. Single sign-on is supported across all applications that are configured to use the same OP. This option became available in the 6.0 software release, which includes the Jazz Authorization Server, an OP that supports the Jazz Security Architecture profile. 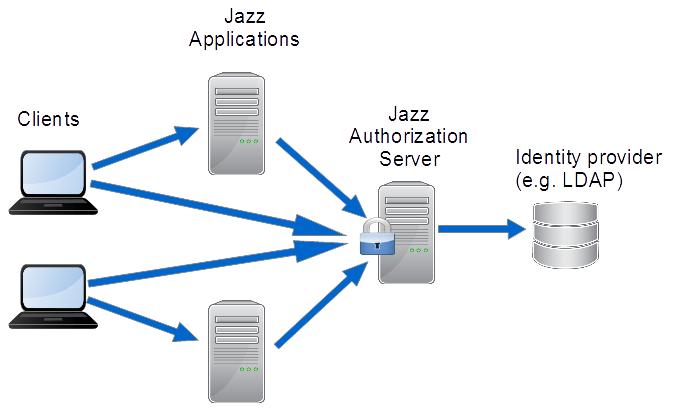 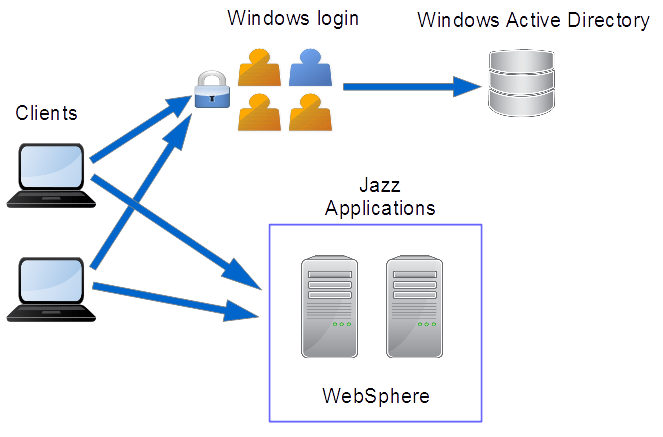 The above mechanisms handle authentication, which determines the identity of the user. Jazz applications also define access levels, known as security roles, which determine whether a user is allowed to read, write, or administer various resources. When using Java EE container authentication (or Kerberos), the web container is responsible for mapping a user’s group memberships to security roles. When using Jazz Security Architecture SSO, the applications themselves are responsible for performing the group-to-role mapping. During the processing of a request that has been authenticated with some user identity and security roles, the Jazz application servicing the request enforces any security role requirements.

Of the four authentication methods defined by the Java EE Servlet specification, Jazz supports three of them: FORM, BASIC, and CLIENT-CERT. The table below describes the differences, advantages and disadvantages of each:

Because of the performance benefits and the ability to have a better user experience in the Web UI, FORM based authentication is the default method pre-configured in Jazz applications. However, the application has been tested using BASIC and CLIENT-CERT authentication, and this can be modified in the deployed application. Generally you would only want to change the default if you would like to provide secure access to feeds by feed readers that can handle BASIC authentication, or if your organization uses client certificates or smart cards.

The security roles are defined in the following segment of the container-authenticating deployment descriptor:

These roles are used to configure access to web resources. For example, the following segment by default secures the /secure/authenticated/identity URL in the application, requiring authentication by users with one of the security roles:

As mentioned above, for performance reasons and improving the user experience, we recommend using the pre-packaged default FORM-based login configuration. However, if you have reasons to change to BASIC, this can be configured by modifying the deployment descriptor. First comment out the following section:

Next, uncomment the <login-config> element that is used for BASIC:

You can change the realm name if you like; it will be displayed to the user when they log in to the application.

If you are using Tomcat, you must also modify the “server/tomcat/webapps/<app>/META-INFO/context.xml” file and change the className attribute on the “Valve” element from:

You must also remove the characterEncoding attribute.

Starting with the 6.0 software release, Jazz Security Architecture SSO is available as an authentication option. Based on OpenID Connect, authentication is not performed by the container hosting Jazz applications, but instead is delegated to a separate Jazz Authorization Server, which performs the role of an OpenID Connect provider (OP). When a user logs into a Jazz application, the OP generates a token for the user (known as a bearer token) that can then be used to authenticate with any application that is configured with the same OP. Therefore, Jazz Security Architecture provides a single sign-on experience that is independent of the type of application container, unlike Kerberos, WebSphere, and Tomcat single sign-on mechanisms. Also, since only a single server (the Jazz Authorization Server) must be configured for authentication, it is simpler to set up, compared with configuring multiple Jazz Team Server, Rational Team Concert, and Rational Quality Manager servers that are running in separate containers.

Configuring Jazz applications for Jazz Security Architecture SSO is either done at install time, for new installations, or done as a migration procedure, for existing installations that are using some other form of authentication.

Starting with the 6.0 software release, Kerberos is available as an authentication option. Kerberos is a network authentication protocol that relies on a trusted, external service to authenticate users and issue tickets, which can then be used to access any application that is secured by the same Kerberos environment. In particular, since Microsoft Windows uses Kerberos by default, users that log in to the Windows operating system can access Jazz applications configured for Kerberos without any further authentication required, using Jazz clients or web browsers running on the same Windows workstation. Users can also use clients running on non-Windows operating systems, but have to do a separate “Kerberos login”.

As of the 6.0 release, Kerberos authentication is supported by the Rational Team Concert server and clients, and by the associated Jazz Team Server. Those Jazz applications must be deployed in WebSphere Application Server version 8 or later, configured to use a Windows Active Directory server for authentication.

When applications send requests to each other on behalf of a user, the user must allow the interaction to take place by authenticating with the target application. For example, if the user is looking at a work item in Rational Team Concert which has a link to a test case in Rational Quality Manager, in order to see any details of that test case in the Rational Team Concert UI, the user must also be authenticated with Rational Quality Manager. If not, a “log in” prompt will appear in the Rational Team Concert UI where the test case details would normally be shown. Whether or not users encounter these additional login requests depends on whether the applications are deployed with some single sign-on configuration or not. For example, if all applications are deployed in a single application server (whether WebSphere or Tomcat), then single sign-on is achieved by default. Otherwise, applications could be deployed in multiple WebSphere servers with SSO configured using Lightweight Third-Party Authentication (LTPA).

If you want to make feeds available to any feed reader, it is possible to unsecure the URLs for feeds only. This should be done only after deliberate consideration of the security implications. If you unsecure the feeds, you are allowing unsecure, unauthenticated access to any info in the feed itself, but not to the repository artifacts. For example, a feed entry about a work item change may contain the description or the comment from the work item, but it still would not be possible to fetch the entire work item or related artifacts unsecurely.

You can use the following guidelines to help with your decision on what authentication method to use and whether to unsecure the feeds:

No one in your project needs to access feeds outside of Rational Team Concert or a web browser.
You should use the authentication method you prefer and keep everything secure.

You are using Tomcat, and are not interested in writing a custom module to cache credentials.
You should use an authentication method other than BASIC in order to see adequate performance.

You would like feeds to be accessible to other feed readers, but they must be secured to authorized users only.
You can configure for BASIC authentication, and deploy to WebSphere, which has built-in caching support for authentication. Because of the security constraints there will still be some feed readers that will not be able to view the feeds. We also do not recommend using BASIC authentication on Tomcat due to the performance penalty.

You would like feeds to be accessible to other feed readers, and it is okay for them to be visible without security.
Use this option only if you are sure no sensitive data will be leaked by exposing events from your server.

With all of the disclaimers out of the way, this section describes how you can unsecure the feeds.

Following is an example feed URL copied from the Team Artifacts view in Rational Team Concert: 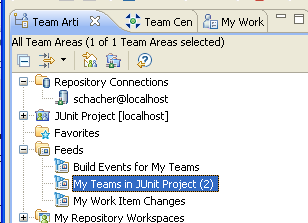 In this example, the client was connected to the server running on localhost, and connected to the JUnit Project example project area. And below is a modified version of this URL with the following changes:

The above feed URL can be used in any third party feed reader without security while all other server operations will still require authentication.

The following documents provide information related to this topic.

No 24 people rated this as helpful.