This document also introduces an alternate and more generic approach to import ClearQuest records to Rational Team Concert. A workshop that details the steps and procedures of this approach is included.

Use the ClearQuest Importer

There are some limitations of the ClearQuest Importer.

Given the current limitations of the ClearQuest Importer, it can be considered if the data can be imported into RTC in a single import pass, or you may need to use other tools such as the CSV Importer in conjunction to accomplish a more complicated importing task.

The idea is that you run the ClearQuest Importer separately for each ClearQuest record type, but don’t import the contents into the RTC repository, but into separate files. Next, you combine the files and tweak the mapping file. You will then take the combined file with the modified mapping file to import to Rational Team Concert project area.

Here is a walkthrough with our example.

In this section, we discuss solutions to import ClearQuest records of complicated relationship.

ClearQuest has a built-in capability to mark a record as a duplicate of another record. You need to make sure that the ClearQuest “Parents”, “Children” and “is_duplicate” fields are part of the query displays.

The mapping file should have the following lines besides other entries

There are situations you want to modify the imported Rational Team Concert work items because there are additional changes happened to the ClearQuest records, or because you want to bring in additional ClearQuest information (extra fields, or relationships).

The procedure of an update often involves the following steps:

In this section, we introduce an alternate and more generic appraoch to import ClearQuest records to Rational Team Concert. It does not use the ClearQuest Importer, but rather use the CSV Importer through a multiple-pass approach.

This approach should be considered when update to imported work items are required to preserve the record topology (i.e parent/child and/or related work item relationships).  This method should also be considered for importing LDAP and/or sub-field data. A set of customized mapping files (one map file for each ClearQuest record type) are created that maps the record type to work item type, including the work item’s state flow.  The import process for this method is illustrated in the graph below. 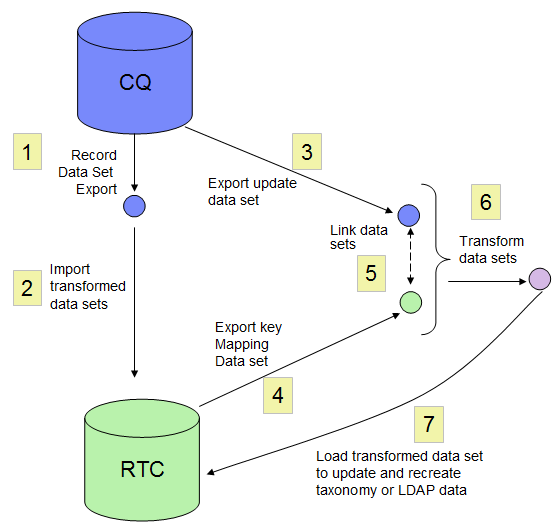 The workshop material in the next chapter demonstrates this process.

This workshop documents detailed procedure for migrating records from an IBM Rational ClearQuest database into an IBM Rational Team Concern repository. It is generalized from a real world migration project and uses a ClearQuest ALM schema as the sample database.

If you have any questions regarding the workshop material, please contact any of  the  following folks,  Jennie Brown,  Steve Cotugno, John Liu, Smita Gupta or Paul Bahrs.

Please refer to the Rational Team Concert infoCenter contents on the ClearQuest->RTC Importer.

The following are some enhancements against the ClearQuest->RTC Importer.

Jennie Brown is an IT specialist at IBM. She can be contacted at jennieb@us.ibm.com.

Steven Cotugno has been with IBM/Rational since 2001. He is a Certified Agile Scrum Master and Certified IT Specialist.  Before joining Rational, Steve spent 16 year developing and managing software development projects in the CAD and factory automation markets. Since joining IBM Rational, he has worked in other industries as well, in both the software engineering space and the IT Application space.  In the last 4 years, he has been leading engagements in the IBM/Rational CLM solution for clients. He can be contacted at steve.cotugno@us.ibm.com.

John Liu has been with IBM/Rational for 12 years.  He lives in Denver, Colorado.   Before joining Rational, he had spent 12 years developing software systems ranging from the first two way paging system in the US to a commodity trading system for a major energy company.  He’s intimately familiar with every role in the software development life cycle.  For the past few years, he has been leading engagements in deploying the IBM/Rational CLM solution for customers.  He’s also a technical lead in DevOps, architecture modeling and asset management.  He won the Outstanding Innovation Award for his role in the development of DOP workbench in 2012. He can be contacted at johnliu@us.ibm.com.

Smita Gupta is a software test engineer at IBM Rational Software. She has supported IBM Rational ClearQuest and IBM Rational Team Concert (RTC)/Jazz as a technical support engineer for 6+ years before moving to her current role. Within the support role, Smita has developed expertise with Rational ClearQuest’s schema design, databases, migration, integrations with RTC, and web applications. Smita holds a Masters of Science in Management Information Systems from Florida International University. She can be contacted at guptasm@us.ibm.com.

Paul Bahrs is an IBM Executive Architect specializing in IT solutions for government, insurance and financial services industries, world wide. Paul is a thought leader on IBM Rational’s world-wide Solution Delivery Team and supports IBM clients in the planning, adoption and migration to IBM solutions. He can be contacted at pbahrs@us.ibm.com.

Lorelei Ngooi is a software developer at IBM.  She currently works on the Rational Requirement Composer(RRC). Before joining RRC, she had worked on the RTC ClearQuest Connector for a number of years. She can be contacted at lngooi@us.ibm.com.

No 1 person rated this as helpful.