Many teams have their own custom testing tools that meet the specific needs of their group. At the same time they would like to use the numerous features provided by IBM Rational Quality Manager (RQM) to increase the productivity of the testing team. The command-line adapter (CLA) provides a quick and simple path for integrating an existing test tool into RQM. In this article you will learn how to install and configure the CLA, create and execute CLA tests, and view test execution results. The article also covers some of the more advanced features of the CLA, including:

Now that you have the CLA installed, follow these steps to create an RQM CLA test script that will invoke your test tool/application.

Now we need to create a test case for executing the new command line test script. Follow these steps to create and execute the test case. 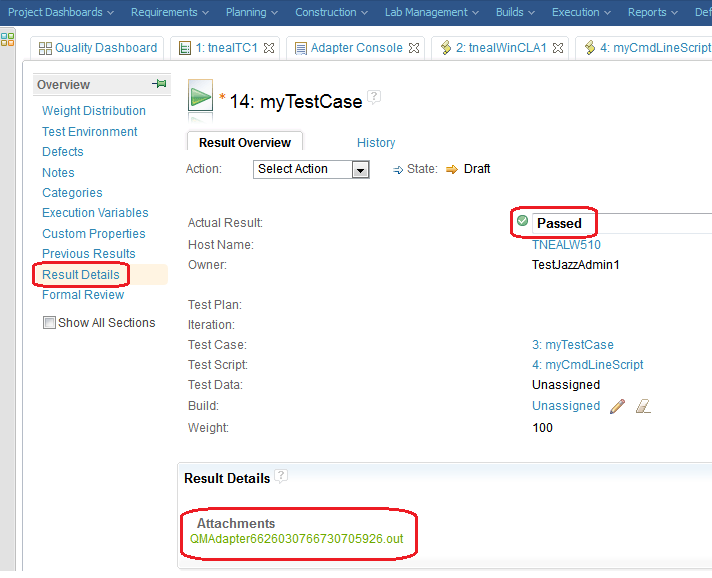 At this point you have seen how you can easily integrate an existing test tool with RQM by creating a command line test script, adding it to a test case, and executing that test case to produce an execution result. Now we will see how you can make use of some more advanced features of CLA tests.

Attaching files and links to the execution result

In the previous example we saw that any output written to stdout and any errors written to stderr are captured and attached to the execution result. You can also attach your own files and links, such as a logfile produced by the application-under-test, or a link to a website.

The format of this file is a Java Properties file. In the simplest case, each line of this file will consist of a name, followed by an equal sign (=), followed by a value. The name is the label that will be displayed in the execution result. The value is either a full pathname to a file which resides on the machine running the CLA, or a URL. If the value is a valid pathname to a file that exists, a new attachment will be created on the RQM server and a reference to the attachment will be included in the execution result. If the value is a valid (correctly formatted) URL, a reference to that URL will be included in the execution result. No attempt is made to access the URL at this point, only to verify it is well-formed.

For example, the following file contents would add two file attachments and one link to the execution result.

The resulting execution result details section would look like the following. 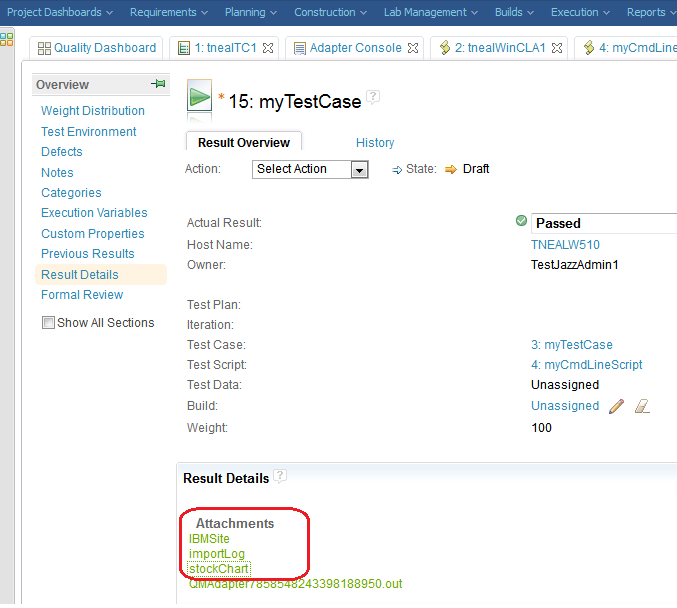 One of the features of execution variables is that you can take a value that was generated in one test script and make reference to it in another test script. This example uses a Unix/Linux style shell script, but the same principles apply to Windows/DOS scripts or other executables as well. This example invokes an application that takes a user name as an argument and returns an ID that can be used in subsequent tests of a sequential suite execution for editing the user information.

Now execute the VerifyNewUser test suite. You can select the Modify Execution Variable Value(s) checkbox at suite execution time to override the default values of the execution variables. When the command line script has finished, click the Start Manual Test link in the Test Suite Execution Console to begin the Manual test execution. You will see the values of the execution variables displayed in the Description field of the Manual test steps. You can also view the variable values in the Execution Variables section of the test case results found in the test suite execution result.

In certain cases your CLA test may want to obtain information about the RQM test execution environment it is running in. For example, your test might need to know the name of the test suite or test case being executed, or possibly verify the test environment operating system or browser value. This type of information is available via a set of execution variables named built-in execution variables. They can be enabled by selecting the checkbox titled include built-in variables in the Execution Variables section of the test script editor. 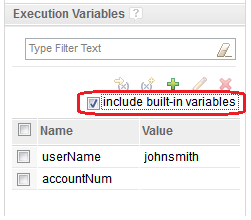 You can use custom properties to populate information into the execution results of your CLA tests. This information consists of any name/value pairs you choose. For example you might want to log the version of your test application and the operating system it’s running on. There are two different ways you can add custom properties to an execution result. If the name/value pairs are fairly static you can simply add them to the commandline.properties file in the CLA installation directory. Any name/value pairs specified in this file, where the name does not begin with ‘com.ibm.rqm’, will be added to the execution result of all tests executed by that command line adapter. For example, if I added the following two lines

to commandline.properties and restarted the CLA, that information would be logged in the Custom Properties section of every execution result. 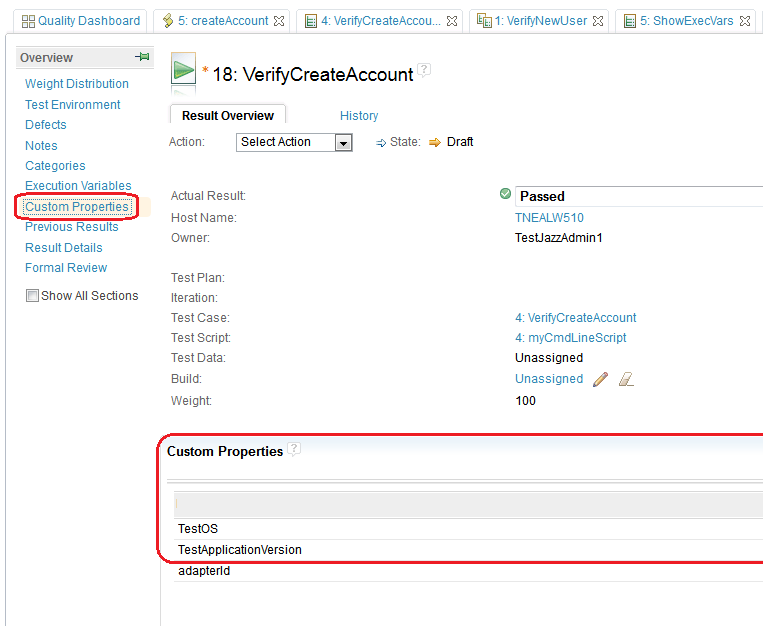 The other way to create custom properties is more suited to the case where the name/value pairs need to be created dynamically. To do this, the shell/batch script or executable started by the CLA test script can access an environment variable named qm_CustomPropertiesFile. The value of this environment variable is the absolute path to a file which will be read when test execution completes. Any name/value pairs found in this file will be placed in the Custom Properties section of the execution result of that single test execution.

Note that the custom property name should not start with a digit.

RQM supports a variety of result codes (Passed, Failed, Error, Blocked, etc) that can be set in an execution result. These result codes can be mapped to application exit codes returned by the shell/batch script or executable started by the CLA test script. For example, by default, if the exit code returned is 0, the result code in the execution result will be ‘Passed’. These mappings can be changed by editing the commandline.properties file in the CLA installation directory. Be sure to restart the CLA after making any changes. The following properties (name/value pairs) define the mappings.

Note that the value for the FAILED result code is ‘*’, indicating that this will match all non-specified exit codes. No exit code should be repeated as this may result in mapping to an unexpected value.

While a CLA test is running, a progress bar is displayed to show the execution progress completed for that test. This progress information can be controlled by the shell/batch script or executable started by the CLA test script. To control the progress values displayed you will need to edit the commandline.properties file found in the CLA installation directory. Look for a property (name/value pair) with the name ‘com.ibm.rqm.commandline.executionproperties’. Give it a value that is the absolute path to a file on the local machine. Note that the file you specify will be truncated/removed at the beginning and end of each test executed by the CLA. Be sure to restart the CLA after updating the commandline.properties file.

The progress bar is updated by writing two properties (name/value pairs) to the file specified with the ‘com.ibm.rqm.commandline.executionproperties’ property. The names of the properties are ‘progress’ and ‘comment’. Valid values for the ‘progress’ property are integers between 0 and 99, indicating the percentage complete for the test. The ‘comment’ property is optional and is a string that can provide additional status about the progress of the test execution. The CLA will periodically read this file to check for progress updates and display the information in the test case execution tab. For example, if the property file contained the following two lines

the test case execution tab would display the test progress as 80% complete and the status as ‘Almost done’. 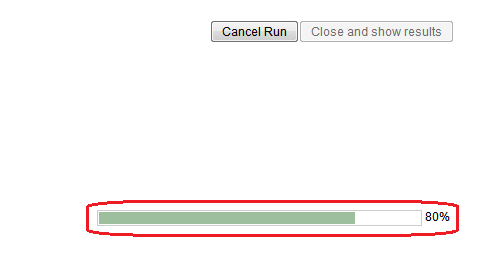 At strategic locations in your shell/batch script or executable you can update the properties file to indicate the percentage complete of the test execution.

Depending on the environment you are operating in, you may want to limit the set of applications that the command line script is allowed to execute. You can do this by editing the commandline.properties file found in the CLA installation directory and setting the value of the property named ‘com.ibm.rqm.commandline.allowed_executables’. If you want to allow multiple scripts or executables, be sure to separate their names with a comma.

Restart the CLA after updating the commandline.properties file.

I hope this article has been helpful and informative. We are always looking for ways to make our tools more useful in meeting your needs. If you have any thoughts or suggestions please feel free to contact me at the address below.

Thomas P. Neal was a member of the IBM Rational Quality Manager development team for several years and is currently part of the CLM Continuous Delivery team. Tom works for IBM in RTP, NC. He can be contacted at tpneal@us.ibm.com.