Rational Team Concert offers much more powerful source code management than Subversion. This reference walks you through the major differences between the RTC and SVN SCM capabilities, concepts, and commands.

RTC and SVN both offer versioned source control that scales for distributed development teams. However, that is where the similarity ends. There are several things that RTC can do that SVN can’t.

Store code safely on the server without sharing it

In a perfect world, developers would write perfect code the first time. They could literally check-in code as they type it. In this perfect world, developers without this magical ability would still have hard drives that never crashed, meaning they would never lose code that they hadn’t checked in. In this imagined perfect world, SVN is a fine tool of choice. In the real world, we know that code is never perfect the first time, and hard drives do crash. There is always the risk of losing that which you have not checked in. Depending on the complexity of the work effort, days or even weeks of work could be in this source control no man’s land. Sure, you could use branches, but have you ever merged SVN branches? It can be quite difficult!

RTC offers the perfect solution with “repository workspaces”. Instead of checking-in to a shared development line, RTC users check code into their repository workspace, where it is safely backed up on the server (your server administrators run backups, right?) The code is not visible to other team members until you deliver it to an upstream flow target, generally the team’s stream. This is such a great idea that the RTC client has a default option to automatically check-in changes to your repository workspace. The repository workspace feature alone makes RTC worth switching to!

Full traceability out of the box

RTC gives you the opportunity to organize your code into logical components. This a great way to separate out concerns, like Build, Core Code, Documentation, Test, and others – just put them in separate components. Developers can load only the components they need to do their jobs. There is no need to juggle multiple repository connections as SVN components might force you to do, just load the components you need from the stream and be on your way.

Do it all from your IDE

With Rational Team Concert, developers never have to leave their IDE. Everything from source code management, to bug tracking, to managing builds and release plans can be done inside an IDE. There is no complicated environment setup, just install the RTC client and away you go!

The key artifact conceptual differences between RTC and SVN are repository workspaces, components, and change sets. 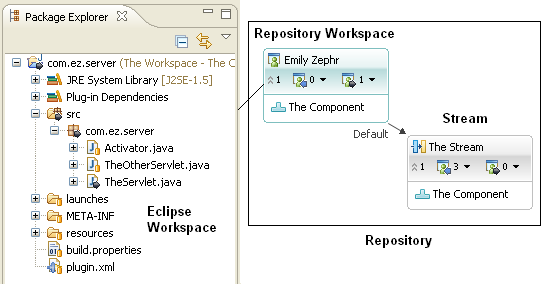 SVN may allow you to “fake” a change set by running a diff against different repository revisions, but in RTC change sets are real objects. They can be linked to work items and builds. They are easily reversed, suspended, resumed, or discarded. You can even search for a change set, to find the exact change you are looking for.

The other key artifact concepts are outlined below:

RTC offers all of the capabilities of SVN and more. SVN commands have clear corollaries in RTC, as shown in the cheat sheet below. The most significant difference is the two-step commit in RTC, which as we’ve discussed earlier is a fantastic feature. RTC offers two major modes of operation: command line or Eclipse client. The command line interface is comparable to the SVN command line. The Eclipse interface to RTC offers features and benefits beyond command line or SVN-based extensions. In particular, the “Pending Changes” view in the RTC rich client is a great tool that manages most source control interactions.

The key command concepts are noted below:

Andrew R. Freed has been with IBM since 2003. He has worked on e-commerce and retail solutions as well as virtualization technology. Currently Andrew is prominently involved in a migration of hundreds of Subversion-based projects to Rational Team Concert. He has used Rational Team Concert since version 1.0 and believes in the SCM architecture it provides. Andrew can be contacted at afreed@us.ibm.com.

No 16 people rated this as helpful.