The following screen shots illustrate how this works. Lets start with the user’s perspective as a consumer of build results. A user is typically interested in the status of a running build and the published result. In this example the build will fail because of a test failure. You will see from a Rational Team Concert perspective the build result executed on Hudson looks very much like what you would expect if the build had been run using the Rational Team Concert build engine. 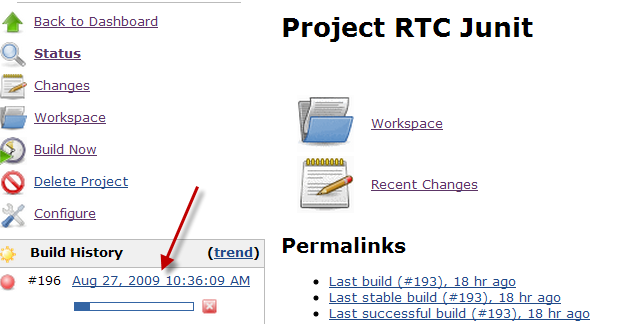 Now you know that a build executed on Hudson can achieve the same visibility in Rational Team Concert as a build run using the Jazz Build System . This is possible because the Jazz Build toolkit, by design, provides capabilities to do everything the JBE does in your favorite build system.

The example demonstrated in this article has the following limitations.

Setting up the Hudson JUnit build

To repeat what was shown in the tour, the instructions are provided here. At a high level you will do the following:

The following instructions will allow you to repeat the build demonstration shown in the tour. The design is such that it is easy to adapt this to your own application builds. More on that topic is covered in How does the Hudson Rational Team Concert Build Work?.

Note that though there is no platform-specific content in the integration demonstrated, what is described in this article has been tested on Windows XP only.

Access to the Rational Team Concert JUnit example project is necessary. If it does not exist the project can be easily created on your Jazz Team server from the Team Concert Eclipse client using the following instructions. Make sure you have assigned user Markus a developer license and he is in the repository group JazzProjectAdmins (this is not a general requirement but in this example Markus will make modifications to the JUnit project area which requires this level of repository access). Also, add a build system license to user Build.

There are two scripts. One is specific to Hudson and the other does the actual application build, JUnit in this case. The details will be covered later in How does the Hudson Rational Team Concert Build Work?

A best practice is to manage your build scripts the same way as you manage the code, in an source control system. In the JUnit Project the build scripts are in the same stream as the code (as a separate Eclipse project named releng). This also allows you to update your scripts in Rational Team Concert and have them deployed along with the code as input to the build. Let’s add the two Hudson scripts to the JUnit stream.

You should have your Jazz Team Server running, a Rational Team Concert Eclipse client running, and connected to the JUnit Project as described in the last step under Prerequisites.

In the following instructions assume you are logged in user as Markus (user/password: markus/markus).

Everything on the Rational Team Concert side is now complete.

Define the build to Hudson

How does the Hudson Rational Team Concert build work?

Let’s cover this in some detail. We’ll start with the buildOnHudson.xml. Only selected portions of the script will be discussed.

We won’t cover the application build buildJUnit-calledFromHudson.xml in the same level of detail. With a few exceptions it is the same as the JUnit build script that is run using the Jazz Build System. The key difference is that after the compile and test tasks if any errors were detected then the build is flagged as in error by creating the zero length file named appBuildErrors. Here is an example of that from the compilation step.

Screenshots of Hudson are Copyright (c) 2004-2009 Kohsuke Kawaguchi, Sun Microsystems, Inc., and a number of other of contributors.

No 7 people rated this as helpful.