Multi-stream development in IBM Rational Team Concert is a concept where more than one stream is used in a project. Here data flows from one stream to another stream which is different from the usual workspace to stream flow. It allows a project to use parallel development. There can be many scenarios where more than one streams are required. For example, a team may want one stream for purely developmental work and another stream for fixing the bugs of production. Later on, perhaps once a month or so, the code from these streams can be merged.

Setting up multi-stream will allow the developers to carry on their work without getting interrupted by production bugs and vice versa. So whenever the next release has to happen, the production bug fixes can be merged with development code and sent for release.

This article provides step-by-step instructions on how to implement multi-stream in Jazz Source Control. It will show the changes flowing from one stream to another. 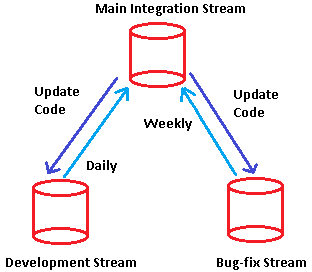 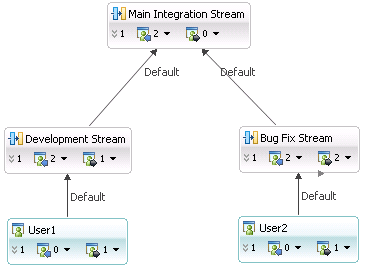 We have the following three streams as shown in the below figure.

For streams to flow changes directly to another stream, ‘Flow Targets’ need to be defined. As the name suggests, a flow target is the target where the change sets will flow. Flow targets can be streams or repository workspaces.

Since the Bug Fix stream flows the changes only once a week, we will not define its flow target now. It will be defined only when the changes will be required to flow.

Note: If flow targets are defined, changes from one stream to another will flow continuously.

Once the flow target is defined, go to the Show -> Pending Changes of the Development stream in Eclipse client of User1.

The project is now present in the Main Integration stream as well. This “Stream to Stream” flow has been achieved using flow targets.

Now, User1 makes some changes in one file and delivers it to the Development stream. A similar flow will happen and using the “Stream to Stream” flow, changes will flow to Main Integration stream.

User2 accepts all the incoming changes, performs a merge (if required), and then delivers his outgoing changes to the Main Integration stream.

User2 accepts all the changes in to his repository workspace. This implies that whatever changes User1 (from the Development team) performed, flows to the Main Integration stream then to the Bug Fix stream and then to the Bug Fix Stream Workspace_User2. So now, User2’s repository workspace has the Development team’s changes. However, User1 still has to get the bug fixes made by User2.

Now all the repository workspaces and all the streams are in sync. That is, all the changes made by User1 and User2 are in sync.

There is a temporary way of changing the flow target. If a user wants to deliver one or more change sets to a different stream just once, they can do so from Pending Changes view using Change Flow Target.

A user can select either a stream or a workspace as the flow target. These changed flow targets will be shown in italics because they are not the default ones.

Once the changes are delivered, the user can revert the change made to the flow target by following the same procedure.

Shuchita Tripathi is working as an IBM Rational Product Specialist in Tata Consultancy Services Ltd. within Technology Excellence Group(TEG). The Tata Consultancy Services IBM Rational Technology Excellence Group (TEG) is a team of experts on Rational software products and technology. She has been using various tools like RTC, RRC, RQM and DOORS and has conducted several trainings in various locations. She is IBM Certified Specialist in Rational Team Concert and Rational Quality Manager and IBM Certified Deployment Professional in DOORS. She can be contacted at shuchita.tripathi@tcs.com.

No 5 people rated this as helpful.