Rational Team Concert is a team collaboration tool offering source control, builds, tracking and planning capabilities, and integration and traceability across these capabilities.

Where does Git fit in here? In the RTC 5.x timeframe, some of our customers indicated that there were pockets of Git usage in their companies – and they wanted to know if there was a way we could work with Git as an alternative SCM in RTC.  Just like Rational Team Concert’s source control integrates with other capabilities, one can imagine similar integration points between Git and Rational Team Concert (like linking Git commits with work items, for example).Through follow-up discussions, we came up with the following use cases as the highest priority ones. 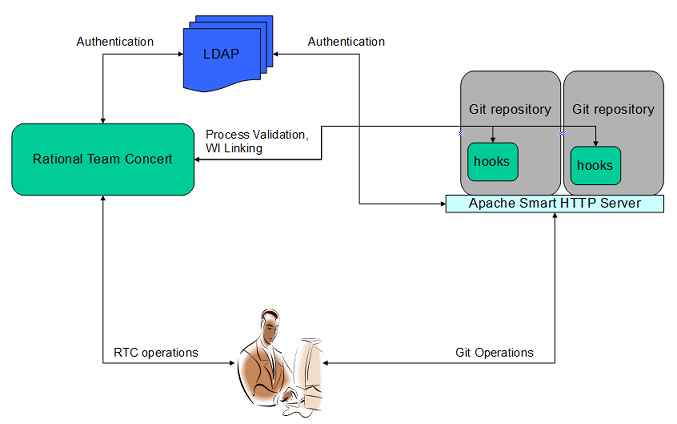 The picture above captures the overall context of this integration. In essence:

Rational Team Concert also allows for branch-specific process enforcement. This can be achieved by creating a Git Ref Mapping in Rational Team Concert within an already registered Git Repository. Like registering, this operation associates a process area to a Git Reference (like branches). In order to realize the above-mentioned use-case, one can create 2 Ref Mappings – one for ‘refs/heads/master’ branch, and other for ‘refs/heads/dev’ branch, where in the roles ‘Deployment Engineer’ and ‘Developer’ roles have the permission to push commits, respectively.

Caveat: The process area mapped to a Git Ref should be the child of the process area associated with the corresponding Git Repository while Registering. This enables process customization (or overriding) at branch level.

For the Git’s push operation, we have added the following permissions: 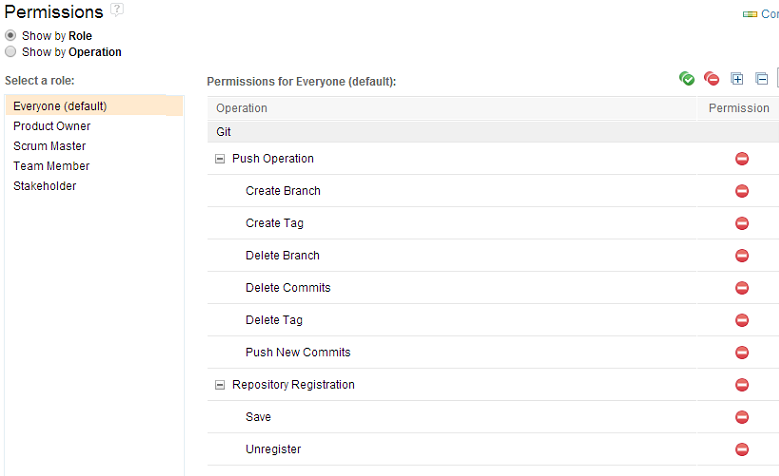 NOTE: Registering and Unregistering a Git Repository with Rational Team Concert is also governed by permissions (as can be seen in the picture above), as defined in the selected process area.

While permissions offer a boolean type of validation (allow or deny), pre-conditions can provide more choice. For Git’s push operation, two new pre-conditions have been added. 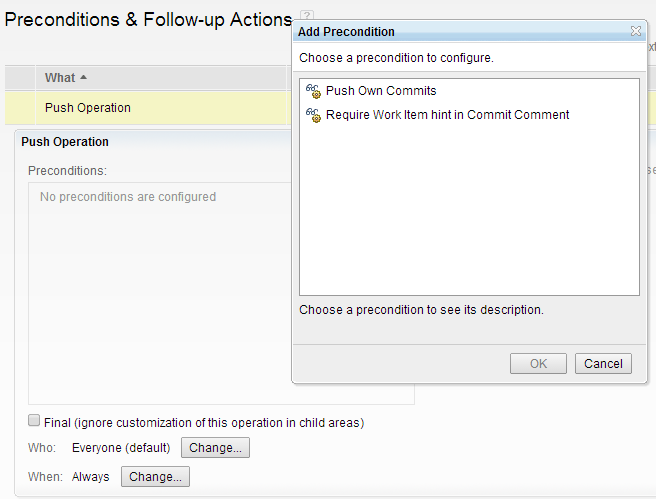 When the user performs a push operation, s/he is usually modifying branches (or References). Rational Team Concert has to make sure that it enforces the intended process specification, by selecting the appropriate Ref mapping, and picking the associated process area – i.e., if a Ref mapping for the branch ‘refs/heads/master’ is created by associating it to the process area ‘P1’, then for pushing commits onto this branch, Rational Team Concert’s process runtime would use the process area ‘P1’ for process enforcement.

For push operations on branches that do not have a Ref mapping, the behavior depends on the setting defined in the Git Repository Editor (see picture below). If this setting is enabled (default), the process area associated with the Git Repository is selected. On the other hand, if this is disabled, no process is enforced – i.e., the push operation is allowed to pass through.

To allow traceability between work items and Git Commits, Rational Team Concert allows them to be linked (similar to how work items can be linked to a change set). This linking is performed by the post-receive hook in the Git Repository on the server.

The work item to be linked to can be mentioned in the commit’s comment (for example, see the picture below). A Git commit can be linked to multiple work items.

Once link is created successfully, the work item has the link to the Git Commit. And, the Commit information can be viewed from the work item UI in Rational Team Concert. 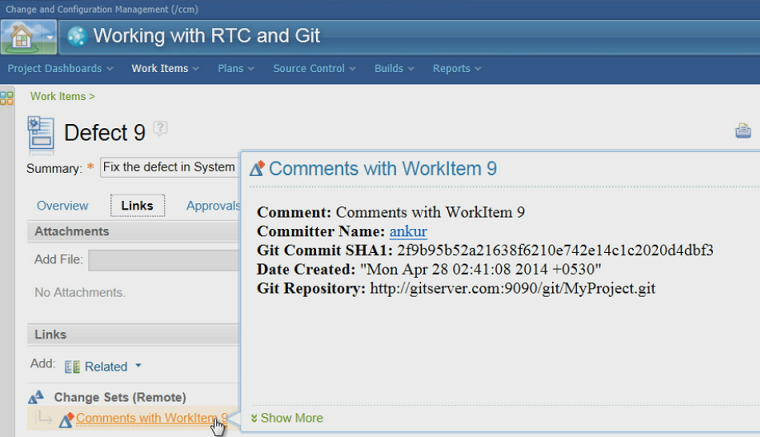 The link between Git commit and work items can be removed or modified (link a commit to another work item).

Why is it required?

These services are required to be executed in the context of an authenticated user so that the appropriate roles and permissions apply. Which means that the user has to login to avail these services. A straight-forward (and naive) way to do this is to store the user credentials somewhere on the Git server-side, and use them to login while invoking Rational Team Concert services. For obvious (security) reasons, this is not practical.

Another alternative is to have a functional user, in whose context, the services are invoked. However, that does not ensure that the right roles and permissions are applied.

Therefore, Rational Team Concert requires the user to explicitly authorize these incoming requests. The user can revoke this access anytime, of course.

NOTE: For the first time (after server restart) a user with JazzAdmin privileges should perform Authorization. During the process, he might choose to authorize all users or only himself. 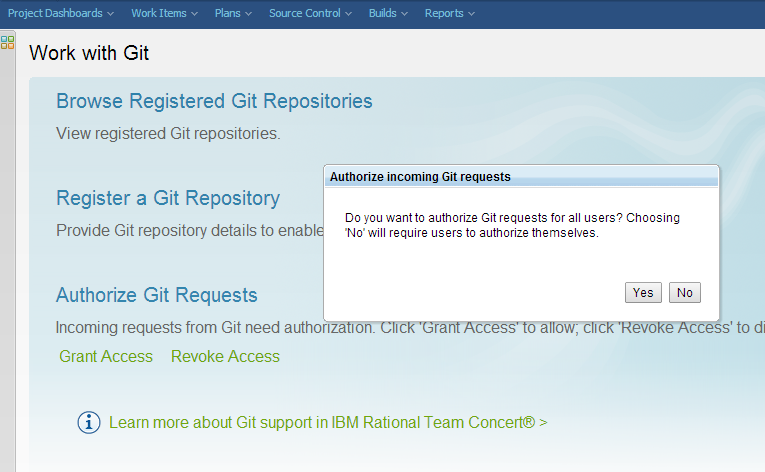 Kiran M N is a member of the Rational Team Concert Development organization, and has been part of the Git Integration team since its inception.

No 15 people rated this as helpful.