In order to simplify a range of deployment choices, this article outlines the supported topologies which IBM has tested the Rational Connector for SAP Solution Manager against. Be advised that other scenarios might lie outside of what is supported by IBM. Before planning a deployment of the Rational Connector in your environment, note which topology is most applicable to your deployment and what is unique in your environment, then contact IBM Support through your normal channels to help you better prepare for your deployment.

Many of our customers implement Rational Connector for SAP Solution Manager to integrate the ALM features of SAP Solution Manager and the Rational solution for Collaborative Lifecycle Management. With this solution, businesses optimize the deployment of their SAP and Rational projects. One of the most frequently asked questions is how should they deploy the SAP Solution Manager so that it will perform well, run robustly, and evolve without restriction. Customers have asked us about possible deployment strategies because they must balance two sometimes opposing forces: the desire to build what’s right for their organizations and the desire to stay within the mainstream of CLM product evolution so they can easily and quickly reap the benefits of the new technology.

The Rational Connector system requirements permit a range of supported middleware platforms and topologies upon which to host the solution. The product runs on several commercial databases and two of the most popular web application servers. We recommend, however, that Tomcat only be used for proof of concept deployments or training on the integration. It is also possible and recommended to introduce reverse proxy servers in front of either a centralized or a distributed set of web application servers.

The CLM applications and the Rational Connector can be installed on shared systems, or distributed across multiple servers for improved scalability. The CLM applications and Rational Connector, if on the same physical or virtual server, should be in separate JEE web application containers (WebSphere Application Server prrofiles or Tomcat instances). Although this flexibility allows you to design a topology to best fit your needs, that flexibility also adds complexity to the planning process. As a result, it is important to plan your deployment topology carefully, as changing your topology later can be very complex and require substantial application downtime. The deployment topologies are divided into three basic dimensions: Evaluation, Department, and Enterprise.

An evaluation topology is useful for demonstration or training deployments only. In this type of installation, all the application and database software is installed on the same server, assuming the Rational Connector database is Derby. If the connector database is one of the other supported database vendors, the database instance should be on another dedicated database server. It is not recommended that you start with this topology and then attempt to expand it into a Departmental or Enterprise topology. If you have any intent to create production level artifacts, you should consider either a Departmental or Enterprise topology.

Departmental topologies are useful for small team and single-server deployments. Use a stable, company-approved host name and register it with the domain name server (DNS) to keep the URLs of the data stable. In this type of installation, databases are installed on a dedicated database server, and one or more other applications are installed on an application server. A key advantage of the departmental topologies is that they require less hardware and are easier to deploy initially. These topologies are best for smaller projects and smaller-sized teams. Crucially, if you are fairly certain that your deployment will likely expand, you should consider starting with an Enterprise topology.

Enterprise topologies are useful for production or medium- to large-sized teams and multiple server (or distributed) deployments. Use a stable, company-approved host name and register it with the domain name server (DNS) to keep the URLs of the data stable. Enterprise topologies distribute the CLM applications Jazz Team Server (JTS), the database software, etc, and are more flexible. These topologies enable you to incrementally adopt applications into your deployment and configure them to use the same JTS. In this type of installation, databases are installed on a single database server and each application is usually installed on its own dedicated application server. In addition, to connect multiple application instances to a shared JTS, the instances must all be authenticated from the same authentication realm and thus share the same set of users.

The following variables describe the key characteristics which provide variation in the typical Rational Connector deployment. These along with the previously mentioned key dimensions are used to distinguish the supported topologies.

Though integrations are an important dimension, they are not addressed in this article or included in the referenced topologies. Additionally, you should note that specific hardware architectures and/or virtualization technologies are not included among these variables. Hardware architecture and virtualization technologies are very important considerations when defining a deployment architecture, however, more from a performance and sizing perspective.

Based on several sources of input from experiences with customer environments, using the previously mentioned key dimensions and metadata variables, the following standard topologies were identified.

In the following catalog, each topology is described and depicted. The metadata variables defining each are noted.

This is a simple, single server topology whose primary use is supporting evaluations, demonstrations, proofs of concept and training. Given the use of Derby and Tomcat, it can be setup quickly, especially with the CLM express install feature. CLM and the connector are hosted on the same server, but in different Tomcat instances. Both Tomcat instances can be run from the start menu or as services on Windows. CLM and the connector use explicit ports (for example, 9080 and 9443) versus implicit ones (for example, 80 and 443). HTTP traffic between the connector and the SAP Solution Manager can use either an http: or an https: protocol. 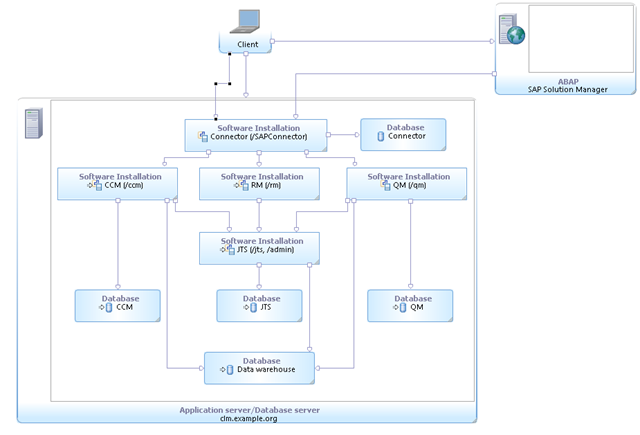 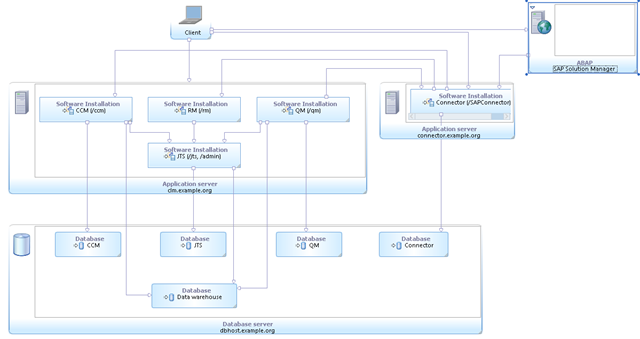 This is a multiple server topology whose primary use is for moderate to large size development teams. Given the use of DB2, Oracle or SQL Server and WebSphere Application Server, it is complex to setup and configure. The various CLM applications and the connector are all hosted on separate servers. Both CLM and the connector run as services. CLM and the connector can use explicit ports (for example, 9080 and 9443). HTTP traffic between the connector and the SAP Solution Manager should be secured using the https: protocol. 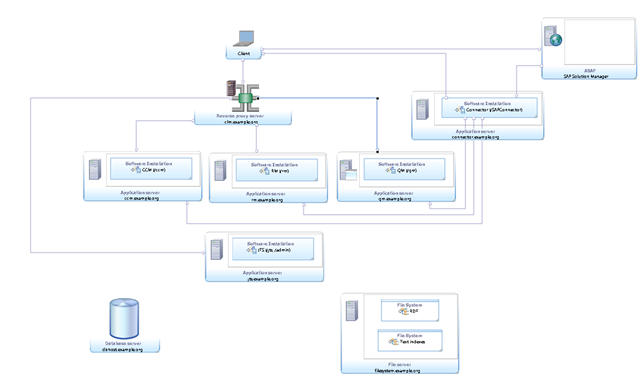